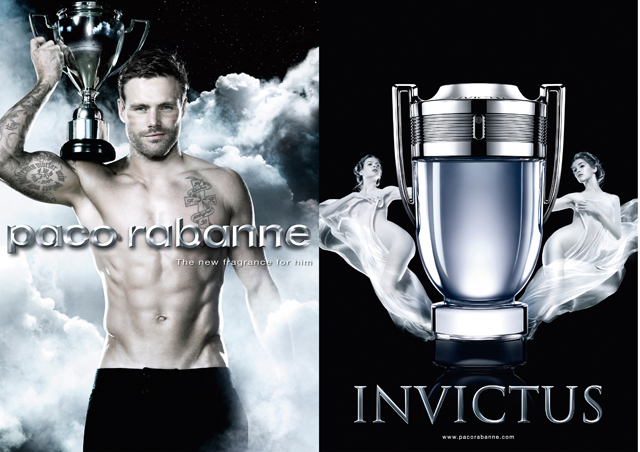 n the field of perfume men are much more faithful than women. In the Italian top ten of last year in fact remained in first place Acqua di Giò (perfume of 1996), in third Terre d’Hermes (2006) and then Dior Fahrenheit (even of 1988). In this ranking, however, stood in second place One Million, the Paco Rabanne perfume that just four years after the launch was able to gain a large market share. The success was tied to a viral campaign generated by the spot, reinterpreted by many users on YouTube, where a boy, snapping his fingers, sees to materialize all his objects of desire.

It was therefore natural groped to repeat the success with the new fragrance Invictus (woody / fresh, characterized by an agreement marine, against a background of guaiac wood, patchouli and ambergris) by exploiting the ultimate interactive. The world reference, this time, is the sport, where the rugby champion Youngquest is one of the judges of a competition designed as a reality show. Seven athletes (emerging) from different nationalities and specialized in different disciplines live together in a house (still secret) and will compete in a series of races. For now are available the trailers that show the regulation and the casting in the seven nations, but it is only since August 20th that we would discover what are the athletes (and related disciplines choices): Internet users will then vote on the candidate favored by donating € 50,000 to the winner to achieve his sports project.

The initiative is, of course, followed by a more classic commercial, absolutely epic, directed by Alexander Courtes. A champion (Youngquest, in fact) was followed through the journey and the experience of his victory, from the moment he enter in the stadium up to the locker room. In the commercial, visions taken from classical mythology express, through a hyper-realistic shape, the glory, the difficulties, the win … and finally the enjoyment. Unfortunately, this last part is once again tied to the female figure seen in a sexual way. Since there is a reference to classical mythology, it is clear that the pretext was the Bacchanalia, and the satisfaction of victory is interpreted with orgiastic reference. For me, a useless platitude. Both because the protagonist is a man (it seems that men only think of that!) either because the protagonist is a sportsman (it seems that athletes do just that left the field of play!). No one expected that a spot of Paco Rabanne could revolutionize the idea that the sport continues to move outside of their own fields, but giving tones much more “human” for the wonderful initiative/reality, I would have preferred that the spot was less “carnal.”